Compensation of the Managing Board

Main features of the compensation system for the Managing Board 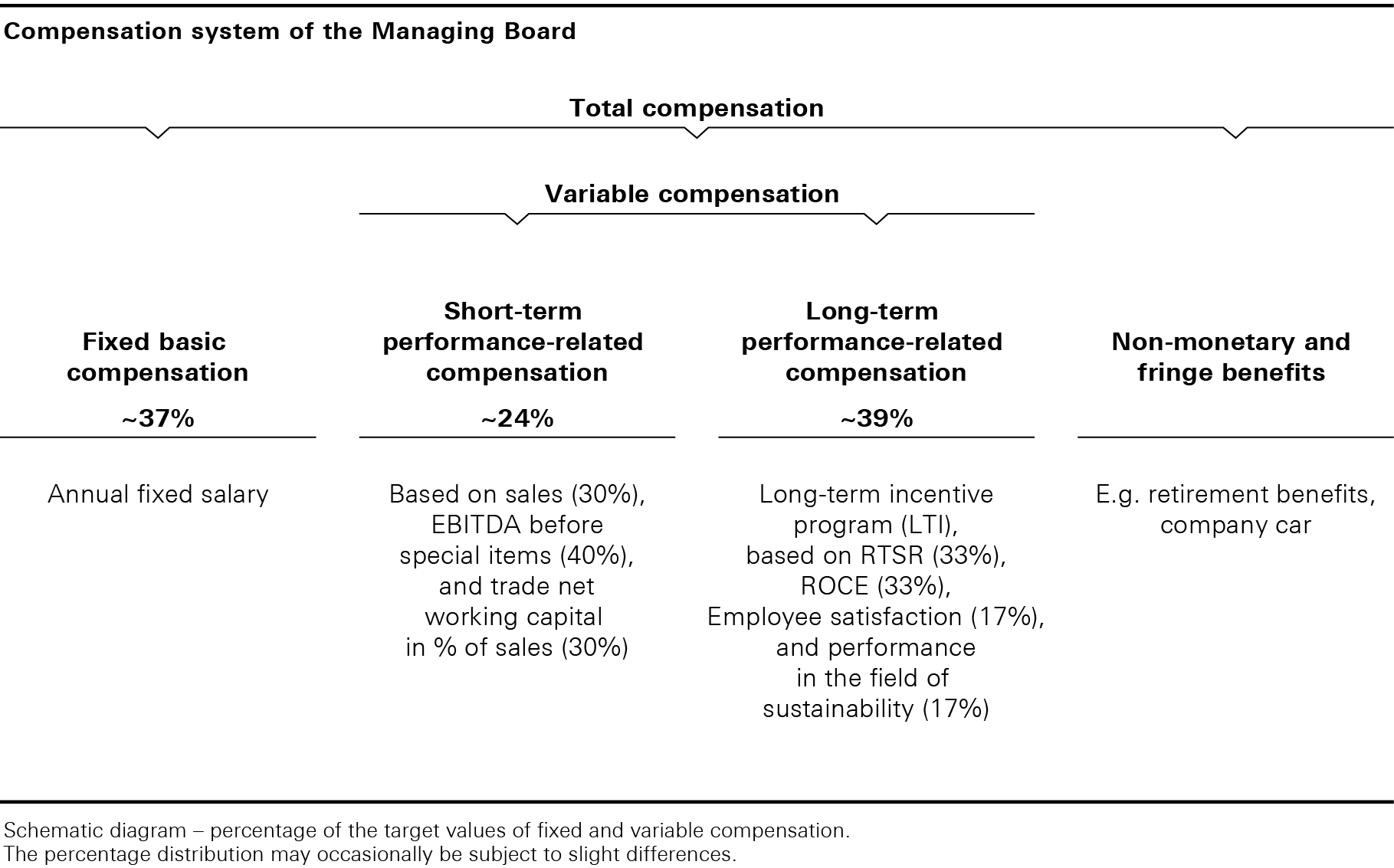 The fixed compensation components consist of a fixed basic compensation, fringe benefits and contributions to retirement benefits. The fixed basic compensation is paid as a monthly salary. Members of the Managing Board also receive fringe benefits to a small extent which they individually pay tax on as per the applicable tax regulations if they derive any financial advantage from private use of the same. The fringe benefits primarily include private use of the company car, supplementary payments to health and nursing care insurance, the conclusion of and contributions to accident and directors’ and officers’ (D&O) liability insurance as well as, to a small extent, other equipment and services needed to fulfill their duties as members of the Managing Board. In accordance with Sec. 93 (2) Clause 3 AktG [“Aktiengesetz”: German Stock Corporation Act], the deductible for the D&O insurance is 10% of the relevant loss, but no more than one-and-a-half times the fixed annual compensation.

As a short-term performance-related compensation component, the STI is tied to the development of certain quantitative targets. In accordance with the Group’s management system, the Supervisory Board has determined the following indicators as targets:

The targets for sales and trade net working capital are weighted at 30% each. The EBITDA before special items is included in the STI’s target achievement with a weighting of 40%.

The degree of target achievement for the individual target components for fiscal year 2018 is summarized in the table below.

For fiscal year 2018, the average degree of target achievement is 104% and thus above the minimum target of 75%. The annual bonus is thus paid out in the amount of EUR 1,991 thousand (Mark Langer EUR 676 thousand, Bernd Hake EUR 459 thousand, Yves Müller EUR 420 thousand and Ingo Wilts EUR 436 thousand).

Under the LTI program, the members of the Managing Board receive a defined number (“initial grant”) of virtual shares (“tranches”) at the beginning of the plan or at the start of their activity. The initial grant is based on an amount (“LTI budget”) defined in the respective service agreement or by an additional agreement. The LTI budget should roughly correspond to the fixed annual salary. The initial grant is calculated by dividing the LTI budget by the share price for the last three months preceding the awarding of the initial grant. Each tranche has a three-year performance term. A one-year qualifying period follows the expiry of a tranche’s performance term. Following the expiry of the performance term, the final number of virtual shares (“final grant”) is calculated based on the achievement of certain target components. The final entitlement to payment is calculated by multiplying the final grant by the Company’s share price during the last three months of the qualifying period.

The “relative total shareholder return” target component is measured based on the increase in the Company’s enterprise value, comprising the share performance and hypothetically reinvested dividends, compared to the MSCI World Textiles, Apparel & Luxury Goods Performance Index. The return on capital employed is based on the development of the ROCE (return on capital employed) profitability indicator versus the budget. The degree of employee satisfaction is measured by an employee survey conducted annually by an independent institute, and the resulting “Employee Trust Index” is compared with the German top 100 companies. The sustainability performance is determined by the Company’s improvement in the Dow Jones Sustainability Assessment, in which the sustainability performance of listed companies is assessed by an index provider. The composition of the Dow Jones Sustainability Index (DJSI) is defined based on this assessment. The targets for the RTSR and ROCE performance criteria each account for one third of the LTI program, while the targets for employee satisfaction and sustainability each account for one sixth.

A target achievement of only 50% minimum and 200% maximum is taken into account for each target component for the purposes of calculating the final grant. A one-year qualifying period follows the expiry of the performance term. The entitlement to payment is based on the Company’s share price during the last three months of the qualifying period and the amount is limited to 250% of the individual LTI budget for each member of the Managing Board (cap). Under certain circumstances (particularly when service agreements are terminated for due cause or when members of the Managing Board resign before a tranche’s term has expired), entitlements of members of the Managing Board may expire under the LTI program.

The individual LTI budget in relation to fiscal year 2016 is EUR 850 thousand for Mark Langer, EUR 458 thousand for Bernd Hake and EUR 206 thousand for Ingo Wilts. In the case of Mr. Hake and Mr. Wilts, the LTI budget is determined from the start of their Managing Board activities in 2016 on a pro rata basis.

Mark Langer was the only member of the Managing Board in the prior year to have a multiple-year bonus for the years 2015-2017; this was the earlier long-term variable compensation according to the compensation system in effect until the end of fiscal year 2015.

All active members of the Managing Board have received pension commitments which are regulated in individual contracts and the amounts of which are measured as a percentage of the contractually agreed pensionable income depending on their duration of membership of the Managing Board. The basis for determining the pensionable income is defined as the basic salary under the service agreement.

For Mark Langer, the Chairman of the Managing Board, this is in the form of a benefit-based commitment.

The Supervisory Board received guidance from an independent compensation expert when designing the contribution-based pension scheme for the new members of the Managing Board.

As of fiscal year 2016, every year, for newly appointed members of the Managing Board, HUGO BOSS pays a pension contribution into an employer’s pension liability insurance scheme taken out on the life of the member of the Managing Board. The contribution corresponds to 40% of the pensionable income, which is determined based on the basic salary under the service agreement.

The amount of retirement benefit in this regard corresponds to the amount accumulated by means of the individual employer’s pension liability insurance. This results from the total unpaid pension contributions per year plus an annual interest rate depending on the insurance tariff in question. A member of the Managing Board shall be entitled to retirement benefit at or after a fixed age limit of 65 years or if they become permanently unable to work due to illness or accident and leave the Company before reaching the age limit. In the event of the death of the member of the Managing Board, their spouse or registered civil partner under the German Civil Partnership Act and their surviving children shall be entitled to a survivor’s pension.

Ongoing pension payments are adjusted annually by at least 1%.

Benefit-based pension commitments for Mark Langer, the Chairman of the Managing Board

If the Chairman of the Managing Board leaves the Company before becoming eligible for a pension, the period by which the benefits become vested is agreed in accordance with the statutory regulations. However, there is no pro rata temporis reduction of the pension entitlement as provided for under legal provisions.

Ongoing pension payments are adjusted annually by at least 1%.

In addition, the HUGO BOSS Group offers the members of the Managing Board the option of acquiring additional pension benefits under deferred compensation agreements. This supplementary pension plan can take the form of retirement benefits or, alternatively, the form of occupational incapacity benefits and/or surviving dependents’ benefits and/or the form of a lump-sum death grant. The pension benefits take the form of monthly payments, while surviving dependents’ benefits can also be granted in the form of a lump-sum capital payment. The contributions from deferred compensation agreements are included in the disclosure about total compensation. Provisions and plan assets are recognized at the same amount.

Benefits in the event of premature termination of employment

As of December 31, 2018, no advance payments were made to the Managing Board.

Total compensation of former members of the Managing Board