Principles and goals of financial management

Within Group financing factors such as market capacity, cost of financing, investor diversification, flexibility, covenants and terms to maturity are taken into account when selecting financial instruments. External loans for Group financing are taken out centrally and primarily in the Group’s reporting currency (euro) within the framework of an “inhouse bank” concept. To cover the financing needs of the Group companies, funds are made available in the form of intercompany loans. This allows economies of scale to be exploited and the cost of capital to be minimized. Occasionally, credit lines are also agreed with local banks in order to take account of legal, tax or other framework conditions. The Group’s financial liabilities are generally unsecured and may be subject to customary market obligations, which are reviewed on a quarterly basis.

The most important source of liquidity for the Group is the cash inflow from its operating activities. The Group’s central Treasury department optimizes and centralizes payment flows through its cash and liquidity management. Generally, Group companies transfer excess liquidity to the “inhouse bank”, e.g. as part of a cash-pooling procedure. In doing so, the excess liquidity of individual Group companies can be used to cover the financial needs of others. This intercompany financial offsetting system reduces the external financial requirement and thus brings down net interest expenses.

The management of market price risks is intended to limit the impact of interest and currency risks on cash flow. The use of hedging instruments, including forward foreign exchange transactions, currency swaps and interest swaps, is intended to secure the Group against unfavorable price developments. Risk Report, Material Financial Risks

The counterparty risk with regard to banks mainly results from the investment of liquid funds as part of cash and liquidity management and from the use of derivative financial instruments as part of interest rate and currency management. With regard to trading transactions, the Group aims for the broadest possible distribution of volumes and ensures that financial instruments are generally only contracted with counterparties that have very good credit ratings.

HUGO BOSS is safeguarding its financial flexibility by means of a revolving syndicated loan of EUR 450 million until October 2022. The syndicated loan agreement contains a standard covenant requiring the maintenance of financial leverage, defined as the ratio of net financial liabilities to EBITDA before special items. At 0.0, the ratio continues to be substantially below the maximum permissible as of the reporting date (December 31, 2017: 0.0). The determination of financial leverage originally specified in the syndicated loan agreement and the level to be observed expressly excludes the impact of any changes in accounting standards on the indicator. Thus, it remains unaffected by the impact of IFRS 16, which is to be applied as of 2019, on EBITDA before special items. Notes to the Consolidated Financial Statements, Note 15

Financing is supplemented by operating leases for the Group’s own retail stores and for logistics and administration properties. In subsequent periods, nominal minimum lease payments of EUR 1,369 million are due (2017: EUR 1,389 million). There are no other contingent liabilities. Notes to the Consolidated Financial Statements, Note 24

The consolidated statement of cash flows is presented in accordance with IAS 7. The cash and cash equivalents reported herein correspond to the “cash and cash equivalents” item in the balance sheet. As cash flow is adjusted for currency effects, these figures cannot be derived from the consolidated statement of financial position.

At EUR 322 million, the cash inflow from operating activities was 23% below the prior year’s level (2017: EUR 420 million). This was mainly due to an increased cash outflow from changes in trade net working capital. In particular, higher inventories as compared to the prior year had a negative impact. As a result of a low amount of debt and low market interest rates, the net cash outflow from interest expenses and income was close to zero (2017: EUR 1 million).

Cash outflow from investing activities was EUR 152 million, 20% above the prior year (2017: EUR 126 million). This was mainly driven by higher capital expenditures on property, plant and equipment and intangible assets.

Cash outflow from financing activities was down sharply in fiscal year 2018, amounting to EUR 139 million (2017: EUR 254 million). This development reflects higher cash inflow from taking on current and non-current financial liabilities compared to the prior-year. At EUR 183 million, the dividend payment was slightly above the prior-year level (2017: EUR 179 million).

In the past fiscal year, HUGO BOSS invested EUR 155 million in property, plant and equipment and intangible assets (2017: EUR 128 million). The investment volume was thus substantially higher than in the prior year. The main reason for this were investments in the modernization of the Group’s own retail network and its IT infrastructure. 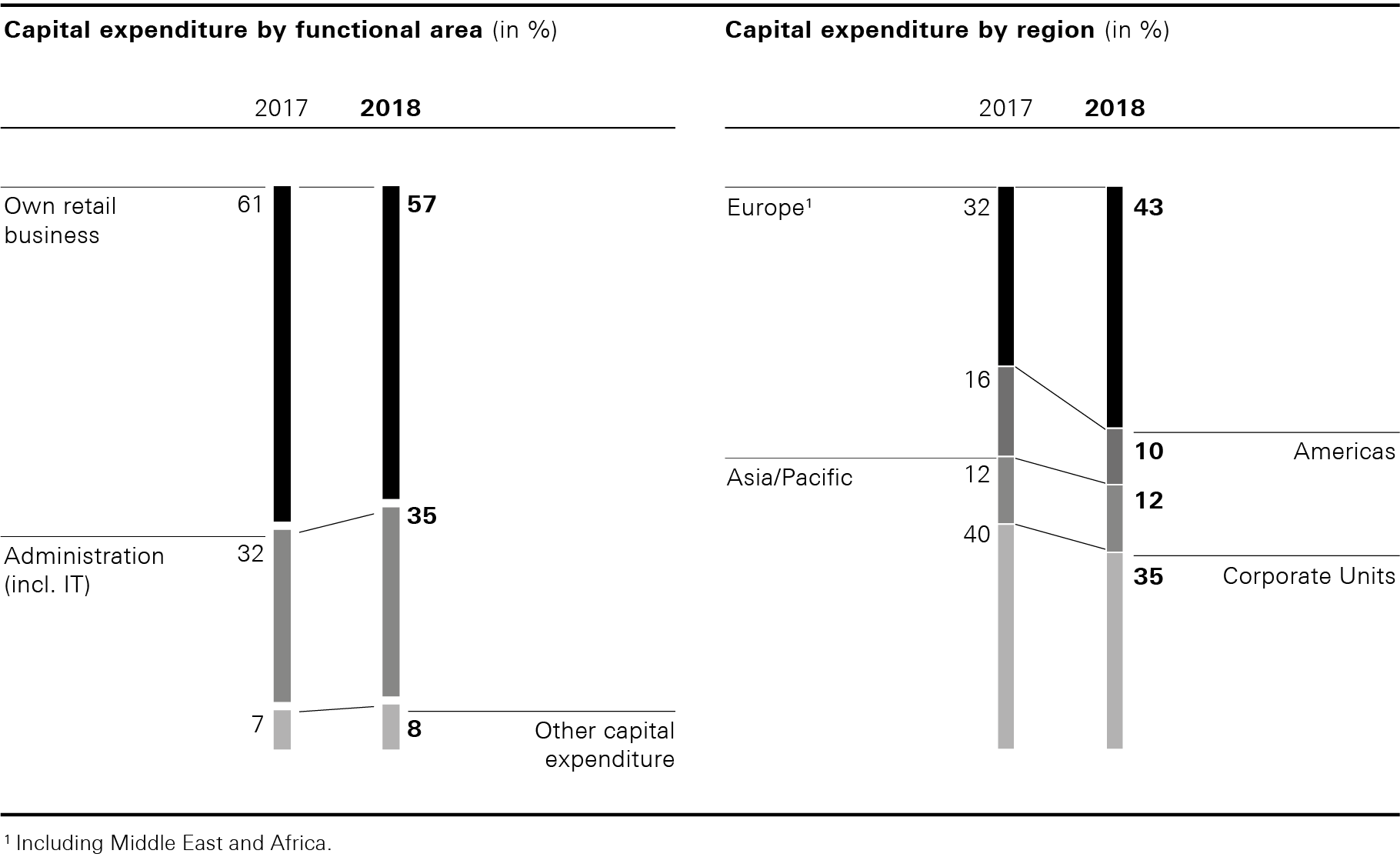 With an investment of EUR 89 million, the Group’s own retail network was once again the focus of investment activities (2017: EUR 77 million). Of this, EUR 45 million was spent on the renovation and modernization of own retail stores (2017: EUR 33 million), representing a 36% increase compared to the prior year. Focus in this regard was on the intensified conversion of existing BOSS stores to the new store concept. As in the prior year, EUR 44 million was invested in selective openings of own retail stores. (2017: EUR 44 million). A material amount of this was spent on investment on new construction of the outlet in Metzingen, which is scheduled to open at the end of 2019.

Capital expenditure on administration amounted to EUR 54 million in the past fiscal year (2017: EUR 41 million). This mainly includes investments of EUR 36 million in the IT infrastructure (2017: EUR 31 million). In addition to the continuous further development of the ERP system, there was further investment in 2018 specifically in connection with the cross-channel integration and the digitization of the Group’s own retail activities. The modernization of administrative facilities, which was also a part of the Group’s “New Ways of Working” project, contributed to the increase in capital expenditure on administration. Employees

Other capital expenditure on the production, logistics and distribution structure and on research and development in 2018 amounted to EUR 12 million (2017: EUR 10 million). This mainly includes replacement investments in the respective functional areas. The reason for the increase in 2018 was the renovation of a showroom in Switzerland.